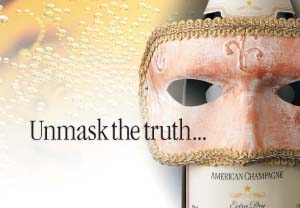 In an attempt to derail the practice by some American wine makers to label their sparkling wine as champagne, the U.S. Champagne Bureau has introduced a campaign called “Unmask the Truth” to set the record straight.

The main ad centers on a sparkling wine bottle that reads “American Champagne,” and is partly covered by a mask. Underneath is text: “Champagne only comes from Champagne, France”, Brandweek reported.

“We’re trying to make it very clear that those who are misusing the name are masquerading as something else,” the Bureau’s director Sam Heitner told Brandweek. The Washington, D.C.-based trade association, which groups all the grape growers and houses of Champagne, France, claims that 50 percent of sparkling wines in the U.S. are mislabeled as champagne.

Heitner said that Bureau’s goal is to educate consumers, so they know that “each wine is distinct and is a representative of a region, they’re different products so we have to make it very clear that champagne labeling is incorrect.”