The Increasing Threat of Counterfeit Wine 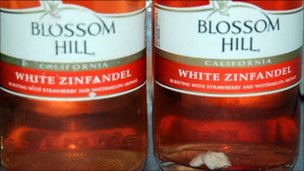 Counterfeit wine is a global problem and in the latest incident, police in the UK have seized 50 bottles from a shop in Liverpool when the scam was discovered after a customer noticed chewing gum at the bottom of a bottle of Rose.

A spokesman for the Liverpool City Council said the counterfeits were of well-known brands including South Africa’s Kumala wine, the BBC reported. It appeared as if the counterfeiters had simply refilled used bottles.

Two immediate give aways that the wine was fake was that the metal screw top was secured to the bottles with a plastic heat seal and the labels were in poor condition.