The Great Potential of Wine in China 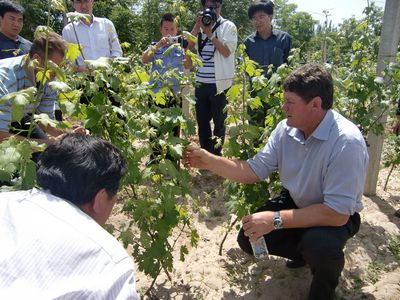 As I have already blogged, the final leg of my recent tour to Asia took me to a vineyard project in the province of Ningxia, home to six million people and one of the big three wine producing provinces in China.

Above are a couple more photos from my trip. The first is of me in a vineyard in the Ningxia. As part of their efforts to increase the wine production, Ningxia will plant 6,000 additional hectares of vineyard. The Cabernet Sauvignon vineyard that I visited above is two-years old. Because of the very cold winters, at least 30cm of the vine is buried underground to protect it.

The second photo is a formal dinner that I attended as the guest of the Premier of Ningxia (he is seated on my right). It was great honour for me to have been hosted by the Premier. During the evening we spoke of the opportunities to work together on projects such as the one I visited earlier.

The trip to China has reaffirmed my strong belief that South African vintners should be looking east.