The Challenge of Global Wine Labels 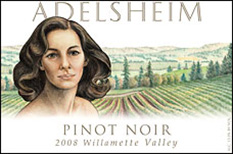 One of the challenges of being a global wine brand is developing a label that works in different countries around the world. What works in Europe will not necessarily work in China. One, expensive, option is different labels for the different regions. Another is a single label that caters for different markets. There are pros and cons to both approaches.

One wine brand facing this challenge is Adelsheim Vineyards from Oregon in the United States. For nearly four decades and 36 vintages, Adelsheim labels have featured a series of portraits of family members. But now David Adelsheim is having to change his label if he wants to compete in the global market place. Below is an extract from the Washington Post which covered the story:

“However, the old labels were causing some problems. ‘We found that certain labels scared the bejeezus out of the Japanese,’ he said. One in particular, used on the label of Adelsheim’s flagship Willamette Valley pinot noir, featured a woman looking directly at the consumer. Japanese customers found direct eye contact with a wine label to be confrontational, he said.

“Great Britain was another problem market. ‘There, the concern was that if it didn’t look enough like a French label, the wine mustn’t be very good,’ Adelsheim said with a sigh. ‘So the quandary was, how to allow our wines to thrive in two of the world’s most important markets while branding ourselves so that people understand we are an upper-tier winery.’”

Adelsheim will introduce new labels in January 2011 to try address the challenge. I wish them luck having just gone through a lengthy process of adapting some of our labels for the global market.