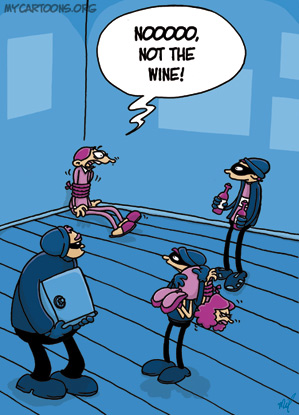 Being in the wine industry we are in the fortunate position that one almost never runs out of wine. And when you do, it is relatively easy to restock. Although I can imagine the disappointment of finding yourself in front of an empty wine rack or fridge, it was quite amusing to read how a thief in a Canadian town was caught on camera, having stolen a few bottles of wine and glasses – of course you need the proper stemware!

Wine seems to have become a popular commodity amongst thieves and it goes much deeper than pinching a bottle to impress your date. Here are some of the major thefts and robberies that have happened this year.

One of the most recent robberies happened in Deux-Sèvres in western France when one of France’s most famous wine collectors, Michel-Jack Chasseuil, were held hostage in his own home by armed men. The Drinks Business reported that the thieves, disguised as delivery men, entered his home, threatened him with weapons and held him hostage for more than two hours. Mr Chasseuil’s cellar was however protected with armoured doors of which the key is kept in a secure bank vault! The thieves left with only some less significant wine and a few personal items. I am very glad that he was left relatively unharmed and with his collection in tact. I am even more happy that I don’t have to fetch a key from a bank to get into the cellar when I have to select a wine for Sunday lunch!

With Bordeaux wine being so expensive, it makes sense for thieves to steer clear of well-protected jewellery stores and art museums and rather focus on wine warehouses and châteaus in the famous wine valley. In February this year Wine Spectator reported on French police busting a highly organized crime ring dealing in stolen wine. They are believed to have stolen €1m (£830,000) worth of grands crus wines from prestigious Bordeaux vineyards.

Wine culture in America is growing every day and it is also clear from the latest crime reports. In March this year, a Californian man was arrested for the theft of 350 cases of wine with an estimated value of at least $400,000 from a warehouse in Napa. Decanter reports that an inside job was expected as there was no signs of a break-in. A warehouse worker was arrested.

And sometimes it happens that you are really not interested in the monetary value of wine, but just in dire need of a glass-full. About two weeks ago, The Drinks Business shared a story on a man in Louisville that held an intruder at gunpoint after he found him in his kitchen opening a bottle of white wine. Now that is something one can sympathise with!