Smoke and Vegetation and Their Influence on Wine 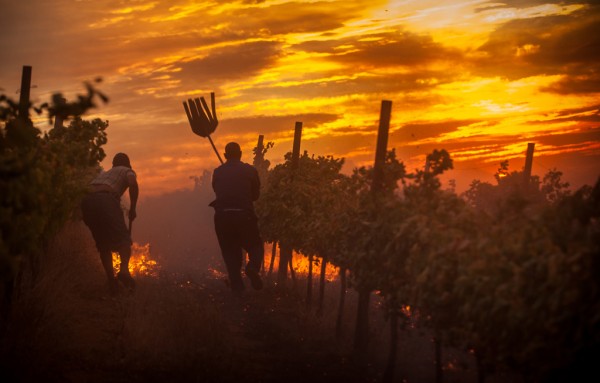 The past week, beautiful Cape Town suffered the relentless destruction of veld fires. Starting in Muizenberg last weekend, only today did Cape Town Disaster Risk Management declared the fires to be under control.

In total 500 people were evacuated while more than 2000 people helped to extinguish the fire. 26 aircraft flown 198 hours at an estimated cost of R2.4 million and about 2 million litres of water were used in 2000 water drops. (news24.com)

Some historic wine farms were also threatened and according to Bloomberg.com at least “two wine farms in the Constantia Valley and one at Noordhoek lost vineyards.” The Boland is no stranger to veld fires and we know very well that even if vineyards do not burn, they can still be affected by the fire, heat and smoke.

In Australia where summer fires often causes havoc in the winelands, much research has been done on smoke taint – the effect smoke has on wine grapes.

According to wine.wsu.edu; “Smoke residue contains high concentrations of volatile phenols, such as guaiacol and eugenol. “Smoke taint” has been found in juice and wine made from grapes, as the glycosylated forms of these phenols tend to accumulate in the skin and mesocarp (pulp) of the berry. These compounds are released during alcoholic and malolactic fermentation (2,3), causing the wine to become unpleasantly ‘pharmaceutical’, ‘dirty’, ‘ash tray’, ‘medicinal’, ‘camp fire’, or ‘burnt’, and reduces the perception of varietal fruit aroma.”

We know that vineyards are very susceptible to outside flavours – and sometimes that is a good thing.

“As the grapes grow in a vineyard surrounded by plants such as wild herbs, flowers and grasses, the bees fly around the vineyard distributing pollen, and as the grapes ripen they absorb the subtle flavor characteristics from these plants.” (vinepair.com)

We often find that the natural flora (fynbos) growing close to the vineyard from which we harvest our Pierneef Sauvignon Blanc adds to its flavour and gives it a veritable expression of its unique terroir.

But does the smoke from various types of vegetation impact the wine differently? According to a study published in Wynboer in 2013, it does not:

“The investigation confirmed that the different vegetation sources which were investigated did not differ regarding the potential smoke taint. The wines made from grapes which were exposed to pine smoke had for example high concentrations of syringol compounds, although these compounds did not occur in the pine wood, or the smoke thereof. It appears that the accumulation of phenols originating from smoke is more complex than only the absorption of the compounds from the smoke.”

According to the same article: “The intensity of potential smoke taint is also influenced by the cultivar and certain viticulture practices. Cabernet Sauvignon and Pinot gris are the most and Shiraz and Chardonnay the least sensitive cultivars.”

While it is all very scientific, my thoughts are with those wine estates affected and of course with all those who lost so much in the raging fires.

Featured image from enca.com Farm workers battle to put out the flames on a vineyard, in Stellenbosch on Sunday, 1 March 2015. The fire fuelled by strong winds and high temperatures swept through the Cape southern peninsula. Photo: Greg Hillyard