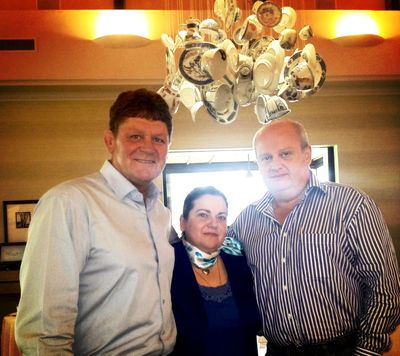 Yesterday I had lunch with Ambassador Radu Gabriel of the Romanian Embassy and his wife at Pierneef à La Motte restaurant. He is in Cape Town for the opening of Parliament and with his European love for the vineyard, he took an hour or two from a very busy schedule to visit the Winelands.

In South Africa, the Romanian wine industry is not well-known. According to Mr Gabriel it is alive and well and one of the biggest wine producers in Europe but with a traditional domestic focus, it does not have a high profile internationally.

Most of Romania’s wine is being consumed in Romania as many producers select to sell their wines in the local market where prices are higher. Due to Romanian wines being unknown, export prices are usually at a low.

In 2008, Caroline Gilby wrote a detailed report for Meiningers Wine Business International on the Romanian wine industry and its (then) new focus.

According to the report, a few large wine companies dominate the market and with low export pricing, quality expectations are often low as well. A number of boutique wineries have however appeared of late and quality and innovation are definitely on the increase.

The most dynamic wineries have also benefited from foreign investment and international winemaking expertise, to help them to improve quality for both the domestic and export markets.

When the 2008 report was written, Romanians consumed well over 90% of their own production. Per capita consumption was approximately 22 litres, below the European average but because of its large population, Romania was one of the top world markets for wine. Industry sources anticipated wine consumption to continue to grow by 6-7% per year, driven by increasing wealth, and by supermarkets capturing larger market share.

While the strong domestic market is positive, it also has a downside: some producers fail to respond to changing consumer demand, there is the danger of consumer tastes switching towards the style of imported wines – drier whites and a higher proportion of reds, and as one of the largest wine markets in the world, it is likely to gain increasing attention from global brands seeking out a new pool of wine-drinking customers.

With the domestic industry working hard to react to increasing competition from imports, the wine industry in Romania is changing rapidly.

In October 2012, Reuters reported on the progress of the Romanian wine industry.

“Romania is the sixth-largest wine grower in the European Union and its enthusiastic proponents say the aspect of its 180,000 hectares of vineyards, unique soil, unusual grapes and inexpensive costs make it a producer to watch.”

Liam Lever of Romania-insider.com summarises the situation with: “… the potential is there, it’s one of the few sectors attracting EU funding, good wines are already being produced, but despite the competitive price for the level of quality, exports are still low and the wines still struggle against better known European wines.”

A lot of this is true for the South African Wine Industry as well.