Review of Our Wines Paired with Japanese Cuisine 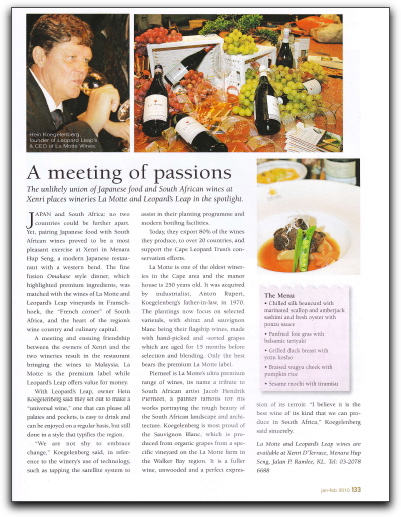 La Motte and Leopard’s Leap wines were recently paired with Japanese food at Xenri, a modern Japanese restaurant in Malaysia. The pairing was covered by Flavour, Malaysia’s premier food and lifestyle magazine. Below are some of the paragraphs from the article.

“Japan and South Africa: no two countries could be further apart. Yet, pairing Japanese food with South African wines proved to be a most pleasant exercise at Xenri in Menara Hup Seng, a modern Japanese restaurant with a western bend. The fine fusion Omalease style dinner, which highlighted premium ingredients, was matched with the wines of La Motte and Leopard’s Leap vineyards in Franschhoek, the “French corner” of South Africa, and the heart of the region’s wine country and culinary capital.

“A meeting and ensuing friendship between the owners of Xenri. and the two wineries result in the restaurant bringing the wines to Malaysia. La Motte is the premium label while Leopard’s Leap offers value for money.

“With Leopards Leap, owner Hein Koegelenberg said they set out to make a ‘universal wine,’ one that can please all palates and pockets, is easy to drink and can be enjoyed on a regular basis, but still done in a sty’e that typifies the region.

“’We are not shy to embrace change,’ Koegelenberg said, in reference to the winery’s use of technology such as tapping the satellite system to assist in their planting programme and modern bottling facilities…

“La Motte is one of the oldest wineries in the Cape area and the manor house is 250 years old. It was acquired by industrialist, Anton Rupert, Koegelenberg’s father-in-law, in 1970. The plantings now focus on selected varietals, with shiraz and sauvignon blanc being their flagship wines, made with hand-picked and -sorted grapes which are aged for 15 months before selection and blending. Only the best bears the premium La Motte label.”