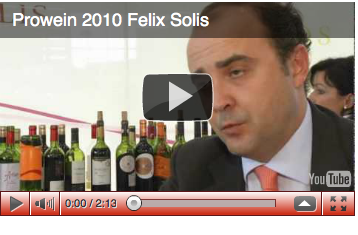 I am back in South Africa following ProWein 2010 and believe that ProWein is one of, if not the best, wine fair in terms of the brands and vintners that attended.

According to figures released by ProWein over 3,300 exhibitors from 50 countries present themselves, among them all relevant wine growing regions in the world, as well as numerous spirits suppliers attended the event. More than 35,000 trade visitors were expected to have attended the three-day fair.

My impression of the fair supports this and the quality of the marketing struck me. What we say about the wine and how we package and present it is just as important as the wine in the bottle.

Below is what Felix Solis Ramos, marketing and export director of Felix Solis Avantis one of the biggest Spanish wine producers, had to say about ProWein.

I got the impression that South African wines received more attention this year and this was particular true for my brands La Motte and Leopard’s Leap with numerous big buyers making contact.

Below is an interview with Sue Birch, CEO of Wines of South Africa WOSA about various things including South Africa’s presence at ProWein and the 2010 World Cup in South Africa.

Related Articles
Exciting Moves for Liam Tomlin Food and Leopard’s Leap Wines
Since we opened the doors at Leopard’s Leap Vineyards, we have shared the premises and collaborated with Liam Tomlin Food. The relationshi...
Read More
Leaked Draft of SA Alcohol Legislation Bans Advertising
The leaked Control of Marketing of Alcoholic Beverages Bill drafted by the Department of Health which totally prohibits the advertising and ...
Read More