Raise A Glass Of ‘China Blanc’ To This 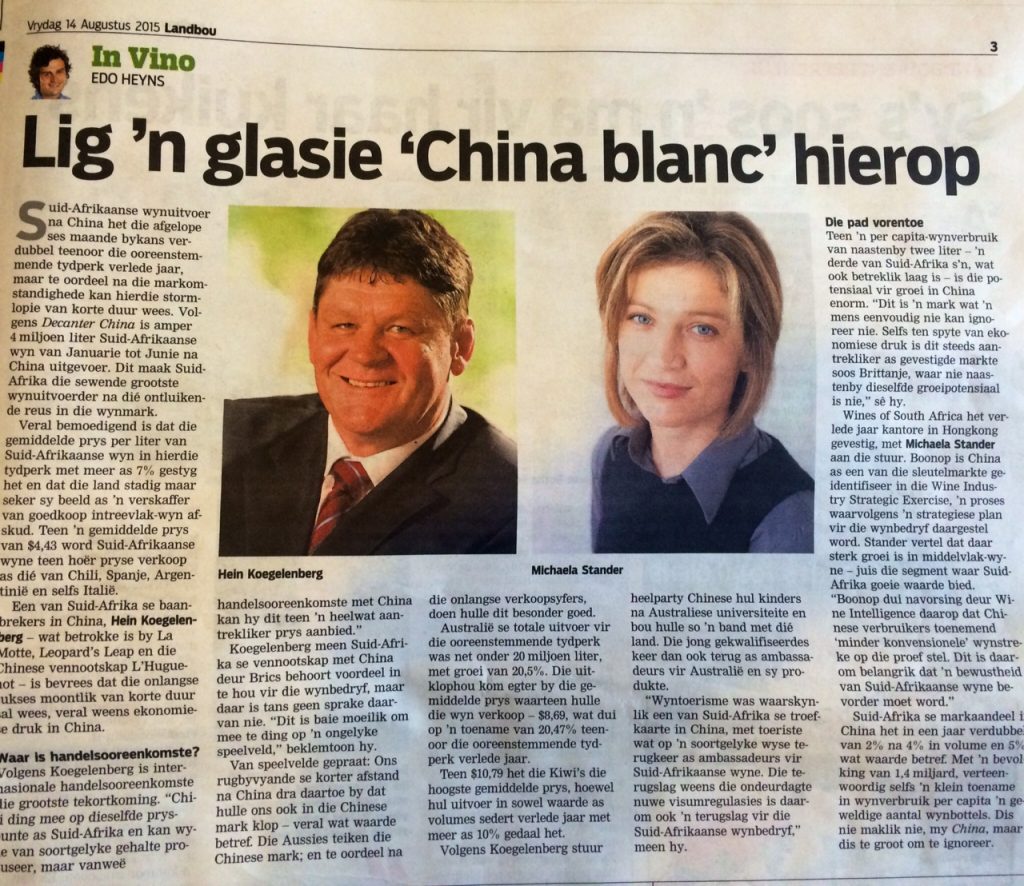 This article by Edo Heyns appeared in this morning’s Landbou Burger – In Vino, Friday, 14 August 2015. Published in Afrikaans, we have translated it into English.

“Over the past six months exports of South African wines to China were almost double the amount of those during the same period last year. But, judging by market conditions, the boom could be short-lived.

According to Decanter China, almost 4 million litres of South African wines were exported to China from January until June, which makes South Africa the seventh largest exporter of wine to this growing giant in the wine market.

One of South Africa’s pioneers in China, Hein Koegelenberg – who is involved with La Motte, Leopard’s Leap and the Chinese partnership L’Huguenot – is concerned that the recent success could be of short duration, especially because of economic pressure in China.

A need for commercial agreements

Koegelenberg is of the opinion that South Africa’s partnership with China through BRICS should benefit the wine industry, but at present there is nothing of the kind. “It is extremely difficult to compete when the playing-field is uneven”, he underlines.

Talking about playing-fields … our rugby enemy’s closer proximity to China contributes to the fact that they also beat us in the Chinese market, especially with regard to value. The Aussies target the Chinese market and, judging by the recent sales figures, they do it extremely well.

Australia’s total export during the corresponding period was just under 20 million litres, with a growth of 20.5%. But the real knock-out is the average price at which they sell wine – $8.69 – which indicates an increase of 20.47% compared to that of the same period last year.

At $10.79 the Kiwis’ average price is the highest, although their exports, in terms of value as well as volume, have decreased by more than 10% since last year.

According to Koegelenberg a significant number of Chinese send their children to Australian universities and, in that way, build a relationship with the country. The qualified young people then also return as ambassadors for Australia and its products.

“Wine tourism has probably been one of South Africa’s trump cards in China, with tourists returning as ambassadors for South African wines in a similar way. The setback as a result of the ill-considered visa regulations is, therefore, also a setback for the South African wine industry”, he said.

At a per capita wine consumption of approximately two litres – a third of that of South Africa, which is also reasonably low – the growth potential in China is enormous. “It is a market one can simply not ignore. Even despite economic pressure it is more attractive than established markets such as Britain, where there is not nearly the same growth potential”, Koegelenberg said.

Furthermore, China was identified as one of the key markets in the Wine­ Industry Strategic Ex­er­cise, a process by which a strategic plan for the wine industry is being conceived.

Stander states that there is a strong growth in mid-range wines – the very segment where South Africa offers good value. “Furthermore, research by Wine Intelligence shows that Chinese consumers increasingly experiment with ‘less conventional’ wine regions. It is, therefore, important that an awareness of South African wines should be strengthened.”

Within one year South Africa’s market share in China doubled from 2% to 4% in volume, while value increased by 5%.

In the case of a population of 1.4 milliard a small increase in wine consumption per capita represents a huge number of bottles of wine. It’s not easy, my china, but it’s too huge to ignore.”