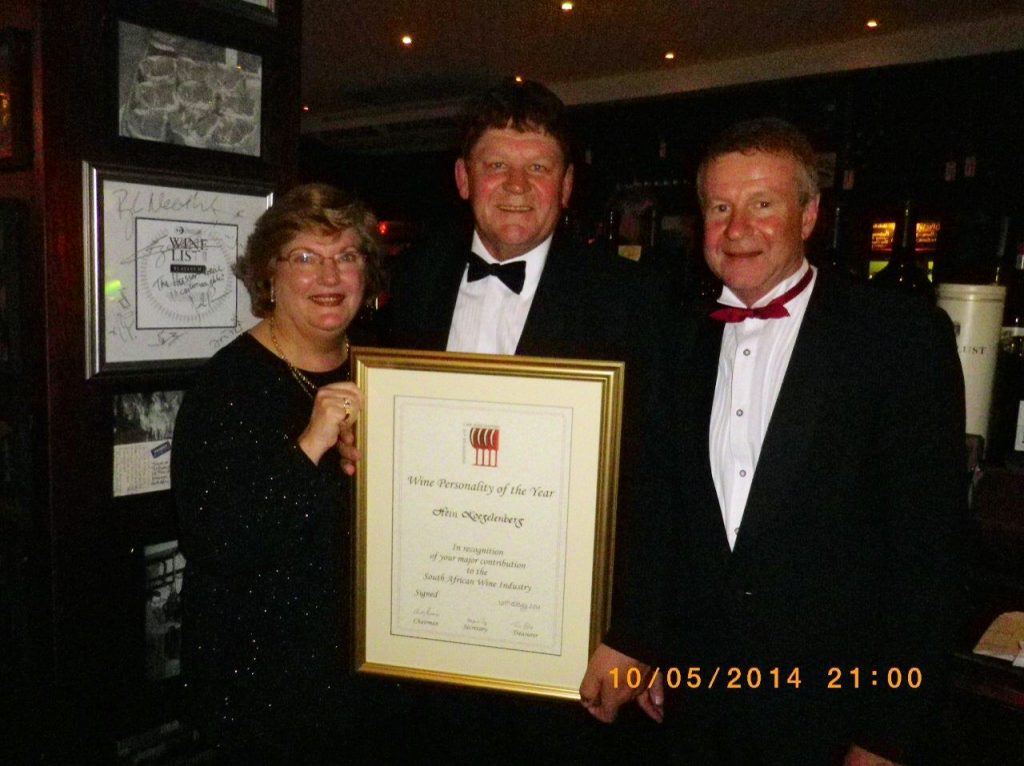 Six new graduates who have completed the gruelling 5-year programme were awarded their certificates as Cape Wine Masters (CWM) at a function held at the historic wine estate Groot Constantia, on May 9. This brings the total number of Cape Wine Masters to graduate since 1984 to 88.

There are three from Gauteng, Sandy Harper, Debi van Flymen and Conrad Louw, while Francois Bezuidenhout, Marius Malan and Nina-Mari Bruwer make up the Western Cape trio who, coincidentally, also all qualified at Stellenbosch University with a BSc Agric degree in Viticulture and Oenology.

This year’s contingent has produced original dissertations on diverse topics:

There have been big changes for the Cape Wine Academy (CWA) during 2014, with the retirement of wine pioneer and CWM Marilyn Cooper after 15 years of service, the last six as CEO, and the strategic appointments of two former CWA graduates, Kristina Beuthner- also a CWM – as Principal, and Michelle Grimbeek as the new Managing Director.

This year special awards went to Sandy Harper for Viticulture, Francois Bezuidenhout for Viniculture, and Marius Malan for Sparkling Wine, while the Brandy Award went to Nina- Marie Bruwer.

At the AGM of the Institute of Cape Wine Masters, Hein Koegelenberg, CEO of La Motte, was given the prestigious Personality of the Year Award. He was instrumental in helping the Cape Wine Academy continue its education programmes after private investors withdrew their support. Hein also had a hand in the wine educational programme for previously disadvantaged and jobless people from the townships. Through a joint venture with a Chinese importer, he has also launched a wine education programme for salesmen in China.

A new chairman of the Institute of Cape Wine Masters was also elected and Winnie Bowman is replacing Andy Roediger who has stepped down.

This year the CWM graduates reflect a gender split of 50:50 – which is more or less in line with the current membership profile of 52% (47) male and 48% (44) female. Western Cape members comprise 55% of the total contingent, and Gauteng members 30%, while other provinces – KwaZulu-Natal and Free State comprise 3% – and overseas members 12% – of the total.

There are now 91 (3 honoraries) Cape Wine Masters, including 11 overseas members in the UK, Australia, Germany and the USA. Two of the three original wine masters, Duimpie Bayly and Bennie Howard and the late Tony Mossop, were the first to attain this prestigious qualification when it was first instituted 30 years ago. The honorary CWMs are Dave Hughes, Phyllis Hands and Colin Frith who were the examiners for many years.

These six dissertations have added valuable perspectives to wine research in South Africa and are available to industry for perusal at the Cape Wine Academy and the SAWIS library, as well as on the CWA website: http://www.capewineacademy.co.za.

CAPE WINE ACADEMY & THE INSTITUTE OF