Moving the Earth for Wine 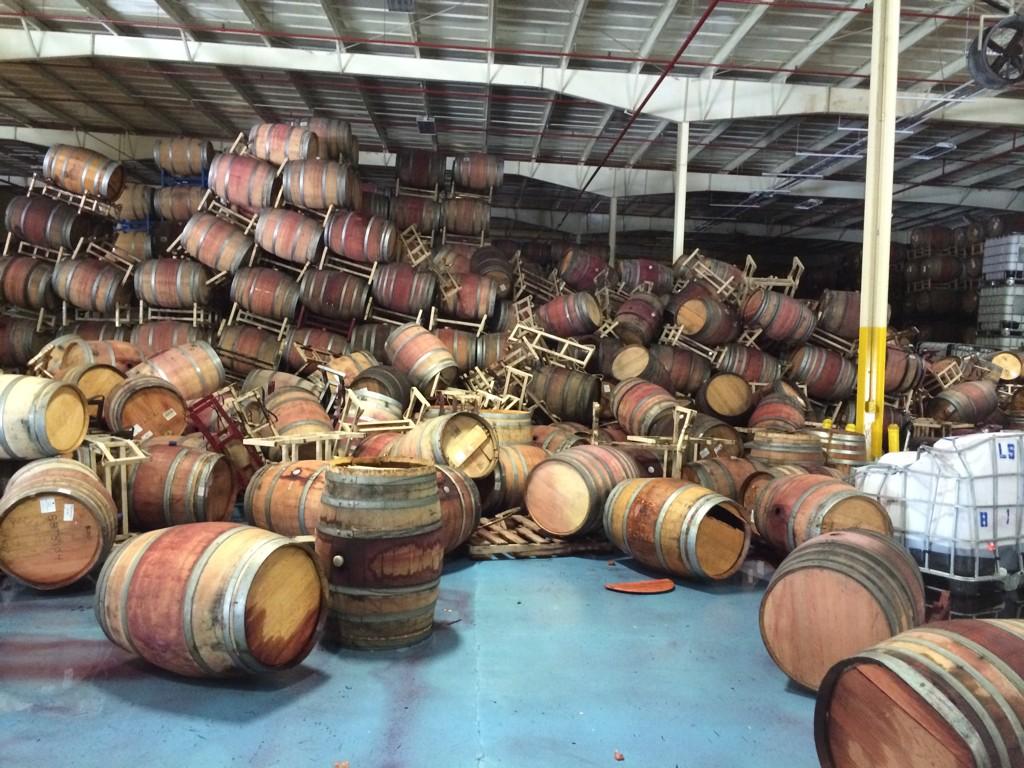 It has almost been a week since a magnitude-6.0 earthquake created destruction in the Californian winelands.

While local wine producers there suffered losses, it was great to read in Drinks Business that the Napa Valley Vintners will be donating US$10 million to help with the immediate need and support of those affected by the quake.

But what were the actual losses to wineries?

Although it is too early to say, according to Lancasteronline.com the losses would not necessarily have a major influence on availability.

“Despite images of broken bottles and burst barrels that could make a wine lover cry in his or her cabernet, Sunday’s earthquake that hit Napa Valley isn’t expected to have a significant impact on availability.” They further quote Napa Valley Vintners, saying “While some individual wineries may experience inventory shortages as a result of the earthquake, it is not expected to have a significant impact on Napa Valley wine inventory in general.”

That being said, interruption in supply is hardly avoidable and might only be felt later when vintages maturing in barrels are due for release.

“Thorn Hill had about 1,000 barrels of its wine tumble in a jumbled heap at its winery. A barrel contains about 60 gallons of wine, or enough to fill about 300 750-milliliter bottles.”

Although clean-up operations will not be easy with heavy barrels having to be moved and racks damaged, it seems that many barrels survived the quake – especially the French barrels with more metal bands and their denser grain oak. The wine might even have benefited from some movement! And there seems to be general consensus that the impact on pricing and availability will be minimal.

The web was abuzz this week with all kinds of earthquake related stories – some on how to keep you wine safe during a quake and other on why it is the earthquake-proneness of the area that actually attribute to the quality of the terroir!

Smithsonianmag.com says “the soil that makes Napa Valley grapes so special also makes the region vulnerable to earthquakes”. Do follow the link to the whole article, but some interesting points are made by a professor of earth and planetary sciences at the University of California, Ken Verosub.

“This is the kind of earthquake that created the Napa Valley, or at least the final morphology of the valley now.”

He continues to say that the valley was shaped due to it being on top of a fault with earlier movements causing mineral riches, limestone and sedimentary rock along the western half of Northern California. “Fault activity, as well as erosion via wind and rain, continued to break apart the many types of rocks around the valley, depositing their riches on the valley floor. The end result is the Napa Valley’s spectacular diversity of soil: over 100 variations, or equal to half of the world’s soil orders.”

According to this article therefore the Californian Valley’s excellence as a wine growing area is due to the soil diversity that allows various grape varieties to be cultivated – from the Pinot Noir vineyards in the calcium-rich soils in the southern part of the Napa Valley, to the Cabernet Sauvignon favouring the volcanic soils of the north.

But terroir is not only soil and Verosub continues to explain that the hills and knolls formed by mega slides millions of years ago, today also influence the valley’s climate, allowing the areas’ 14 distinct American Viticultural Areas.

So while the area may remain vulnerable to quakes, the article argues that “Still, any damages sustained during the earthquake may simply be the price Napa vintners pay for growing in such a geologically attractive part of the world.”

And while in South Africa we are not really used to earthquakes, in the past month, two quakes rattled the northern part of the country. So I thought to also share a few handy tips that I found in the LATimes on how to keep your wine collection safe in the case of an earthquake!