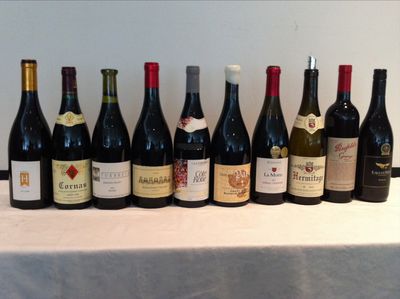 Michael started by reminding readers of the 1976 blind tasting in Paris which saw Californian wines beat their far more fancied French counterparts. “(The) event proved what is now accepted wisdom: very little separates the finest wines of most of the top wine-producing nations,” Michael writes in his column before going onto the Shiraz Experience.

“La Motte’s Hein Koegelenberg has been hosting a Shiraz symposium and tasting for several years, usually with international speakers and a wide array of top examples from France, SA , Australia and the US .

“As a well-known Shiraz producer, he is obviously keen to raise the profile of Cape Shiraz and to enhance the association of La Motte with the best wines. Over the years La Motte’s flagship shiraz bottling — the Pierneef Syrah-Viognier — has always performed creditably against most of the world’s benchmark examples.

“A few weeks ago he hosted another edition of the event, this time in Johannesburg, and as part of the proceedings included a 10-wine blind tasting. Many of the leading Gauteng- based professionals took part, the wines were tasted blind, and the scores were tallied by an independent bookkeeper unconnected to La Motte or its distributor.

“When the results were announced, the La Motte 2007 had finished second . The three other South African wines came third (Boekenhoutskloof 2008), fourth (Eagle’s Nest 2008) and sixth (Haskell Pillars 2007). Since they had been arrayed against a Penfolds Grange 2001 (which finished top), a Guigal La Turque 2004 (which came fifth) and a Chave Hermitage 2004 in seventh, it would be hard to argue that there was any affirmative action at play in the outcome.

“It’s possible to quibble with the majority sentiment: my own scoring differed quite a lot from the average. What is incontrovertible, however, is the strength of the Cape wines in the line-up. None of them was out of class and all held their own against wines which, on average, cost 10 times the price of the South African contingent.

“Tastings like this are enormously valuable — even to the many wine drinkers who share in them only vicariously. If you accept the bona fides of exercise and the result, there is no explanation for the ten fold price differential except country (and brand) discount.

“We don’t believe enough in our own producers and our own wines. Until we do, we will pay the price for this whenever we spend more than is necessary on the same amount of drinking pleasure.”