Learning From the Romans 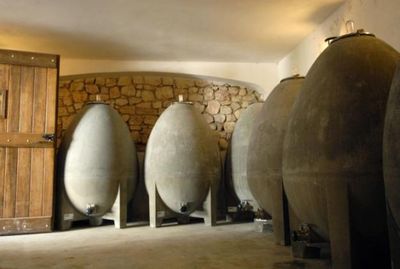 As readers of this blog will now, I am always on the lookout for innovation in winemaking. Above is a picture of the Nomblot Egg, created in 2001 by French vatmaker Marc Nomblot, which is based on the egg-shaped clay amphorae centuries ago.

This is what Time magazine had to write about the Nomblot Egg: “Vinifying in oak can produce woody, toasty or vanillin aromas that are not desirable in every case. Making wine in stainless steel, meanwhile, can deprive it of the bouquet and tannin-ameliorating effects of a measured oxygen exposure, sometimes obliging winemakers to use artificial micro-oxygenation. The Nomblot Egg’s porous clay-cement walls offer a third way, allowing for natural oxygenation without oakines.

“But the tank’s most surprising benefit may well lie in its shape. Creator Nomblot explains: ‘All fluids rise when temperature increases, and do so in a vortex, but in a barrel or other container, the vortex is slowed by the angles,” he says. Within the angle-free Egg, however, ‘the vortex turns naturally for weeks, which raises the lees, and nourishes the wine.’ It also eliminates the need for stirring, which is a common source of contamination from brettanomyces — yeast that leads to spoilage and cloudiness.”

Expect to see the Nomblot Egg appear in wineries around the world. Marc Nomblot is already selling 250 tanks a year and told Time magazine his  “challenge is to convince the best winemakers in every country to use them.”