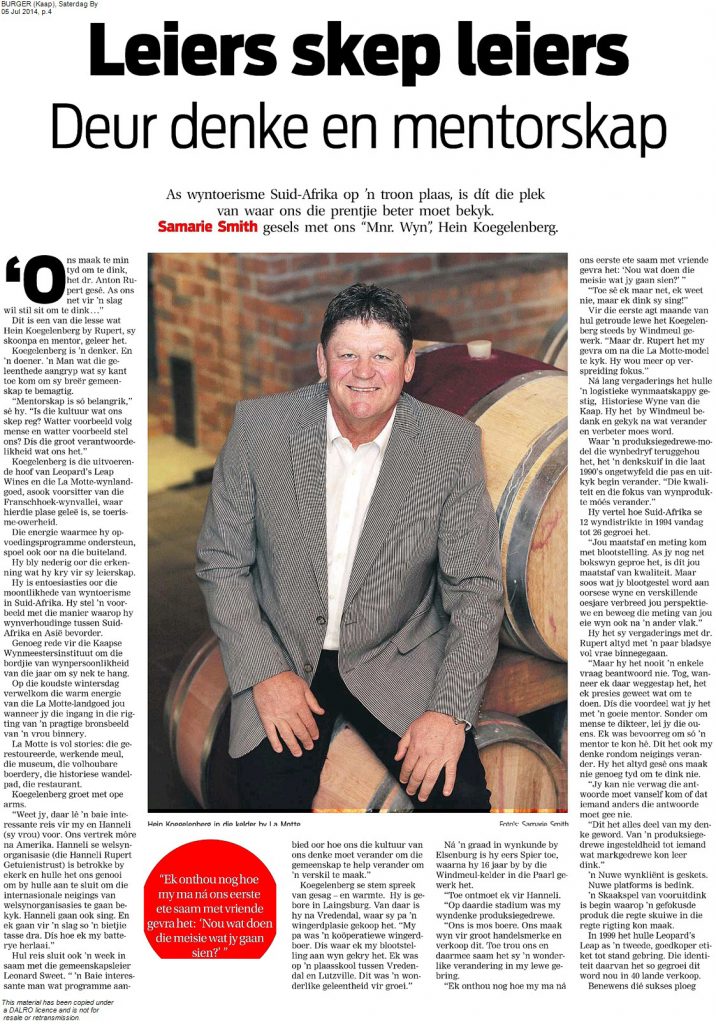 Last week I chatted to Samarie Smith of Die Burger, the Afrikaans daily in the Western Cape.

Here is the English translation.

If wine tourism puts South Africa on a throne, then thís is the ideal point from which to view the picture. Samarie Smith talks to our “Mr. Wine”, Hein Koegelenberg.

“We allow ourselves too little time to think”, Dr. Anton Rupert said. “If only we would sit down, now and then, to do some thinking …”

Hein Koegelenberg is a thinker. And a doer. A man who grasps opportunities to empower the broader community.

“Mentorship is so important”, he says. “Do we create the correct culture? Which example do people follow and how good an example are we setting? That is our major responsibility.”

Koegelenberg is the CEO of Leopard’s Leap Wines and La Motte Wine Estate, as well as Chairman of Franschhoek Wine Valley Tourism, the Valley being the area where these farms are situated.

The energy with which he supports and drives educational programmes is felt far beyond South Africa’s borders.

He remains humble about all the leadership-related feathers in his cap. He shows great enthusiasm for the wine tourism potential of our country. And he sets an inspiring example in the way he promotes wine relationships between South Africa and Asia.

Enough reason for the Institute of Cape Wine Masters to have crowned him as Wine Personality of the Year.

On the coldest winter’s day one is welcomed by the warm energy of La Motte as you drive into the estate in the direction of an impressive bronze sculpture of a woman – the symbolic Wine Bearer.

La Motte has many facets: its Pierneef à La Motte restaurant, its own museum, biological farming, a historic hiking trail, a renovated 18th-century water mill, still in a working condition.

“You know, a most interesting trip is awaiting Hanneli and myself. Tomorrow we’re off to America. Hanneli’s welfare organisation (the Hanneli Rupert Getuienis Trust) is involved with E-church and we have been invited to join them in taking a closer look at the international trends in welfare organisations. Hanneli will also be singing. And, for a change, I’m going to carry our luggage – that’s how I’ll recharge my batteries.”

Their trip will include a week in the company of community leader Leonard Sweet.

“He is a very interesting man, who presents programmes on how we should change the culture of our thinking in order to help change the community, to make a difference.”

Koegelenberg’s voice carries authority – and warmth. He was born in Laingsburg. From there, he moved to Vredendal, where his father bought a small wine-farm.

“My father was a co-operative wine-farmer. That was how I was exposed to wine. I attended a farm-school between Vredendal and Lutzville. It was a wonderful opportunity to grow.”

After obtaining his qualification in Viniculture at Elsenburg Agricultural College, Hein spent sixteen years working at Spier Wine Farm near Stellenbosch before joining Windmeul Winery in the Paarl area.

“Then I met Hanneli.

“At that stage my thinking in terms of wine was production-driven. After all, we were farmers. We produced wine for well-known brands and sold it. Then we got married … and Hanneli changed my life in a wonderful way.

“I remember my mother’s question after we’d had dinner together with friends. ‘Nou wat doen die meisie wat jy gaan sien?’ ‘This girlfriend of yours … what does she do for a living?’

“But then Dr. Rupert, Hanneli’s father, asked me to take a look at the La Motte model. He wanted a stronger focus on distribution.”

After lengthy meetings they founded a logistic wine company – Historic Wines of the Cape. Hein resigned at Windmeul and looked at what had to be changed and improved when it comes to wine logistics.

Where a production driven model held back the wine industry, fresh thinking during the late 90s undoubtedly started changing the pace and the viewpoint.

“Quality and the focus of wine products simply had to change”, Koegelenberg puts it, and explains how the 12 wine districts in South Africa in 1994 have grown to 26 today.

“Exposure changes the way you measure and compare. If you have only tasted bag in box wine, that is your measure of quality. But as you are exposed to overseas wines and different vintages, your perspective is broadened and you start measuring your own wines against a different level.”

He always entered his meetings with Dr. Rupert with a few pages of questions in his hand.

“But he never answered a single question. Although, when I walked out of the meeting, I knew exactly what to do. That is how you benefit from a good tutor. Without dictating, you lead others. I was privileged to have had such a mentor. It also changed my thinking around trends. He always said we don’t make enough time to think. You cannot expect the answers to come to you by themselves, or from someone else. All that became part of my thinking – from a production-driven person to one who could start thinking in a market-driven way.”

A new wine client was defined. New platforms were considered. A game of chess was launched by which a focused product had to make the correct moves in the right direction.

In 1999 the Leopard’s Leap brand was introduced as a second, more affordable label. The identity of this label grew to such an extent that Leopard’s Leap wines are now sold in 40 countries. Over and above this success, Leopard’s Leap now makes a worthy contribution to conservation, with its active involvement in the protection of the Cape Mountain Leopard.

“I cannot make a better wine than you. It is all just perception. Yes, there are price restrictions and quality categories, but you have to have a focus.

“In South Africa we did things well, but we weren’t well-known for anything.

“These days we do have a focus – think of Meerlust (Rubicon), Kanonkop (Paul Sauer) or Hamilton Russell (Chardonnay)”, he mentions a few examples.

La Motte developed the same focus, with Sauvignon Blanc and Shiraz, and elevated these varieties to an international level. La Motte even made its own Rhône wine in France – only a single barrel, though – and labelled it Three Stakes.

“Robert Mondavi changed perceptions, challenging the French in a wine-tasting in Paris. They thought his wine would hit the bottom of the list. Surprisingly, his wine ended up in the middle amongst the top French names.

“In this way he proved that wine quality was not reserved for France only. It’s just a perception. And the consumer’s perception must always be that he gets more value than what he pays for.”

Mondavi was also the first wine giant who said that product alone was not enough. He started organising music, art and wine festivals, combined food with wine, created stories around a product and established this culture on a world-wide scale.

“So, apart from stories, we must create wine experiences, in order to attract tourists. With our Pierneef à La Motte Restaurant, for instance, we have researched and documented 150 regional food recipes that were published in a cookbook and we also offer visitors an unusual food experience. At Leopard’s Leap, again, a totally different experience is offered.

“We obtained the approval of Marita Bailley, daughter of artist Jacob Hendrik Pierneef, to use representations of the set of her late father’s original lino-cuts on the labels of our up-market wine ranges – the lino-cuts were a gift to Hanneli from Dr. Rupert. The La Motte Museum was built as a place where art can be exhibited in conjunction with the history of the farm.”

One absorbs Koegelenberg’s own story together with other facets of the visit to La Motte. He is quite correct … in any restaurant the wine-list ends up in the hands of the most experienced wine-drinker at the table. Everybody shies away from making the wine choice, while all that’s needed is a good story about the wine.

“And that was our objective … to change the perception about wine. To establish a culture of excellence. People associate with energy. If you can create the energy, you’ll attract people.”

La Motte is a wine tourism champion, as selected in the annual competition presented by the Great Wine Capitals of the World network, of which South Africa is part.

“When it comes to wine tourism, South Africa is way ahead of the rest of the world. Drive from Cape Town, past Groot Constantia and Klein Constantia, through Stellenbosch, Franschhoek, Paarl, Robertson …

We are either too shy, or we don’t know how to express ourselves, but it is high time for South Africa to speak out and say to the world: We are the best! We are wine tourism!”

Social networks have given wings to brands and boosted the opportunities for wines. Trends and platforms change at such a pace that you have to keep your ears close to the ground … sometimes even in foreign territory.

“When the American market collapsed, ten years ago, it was a good time to investigate other avenues, and China was a massive opportunity. At that stage, nobody from here really sold wine to China. We immediately approached the most successful distribution networks and sold our wines through platforms that were already in place.

James Tan, a Malaysian-Chinese, was appointed and a start was made in developing the market: Vietnam, Malaysia, Singapore, Taiwan, China, Japan.

“James works on that side, putting programmes together, and we visit agents twice a year. James is also arranging a function in Beijing in July, to celebrate Mandela’s birthday, where our wines will be poured.”

With Asians it is important to build relationships and, during his negotiations, sometimes on the golf course, Koegelenberg met businessman Mr. Woo Swee Lian, CEO of Perfect China (a company that recently made an investment in Val de Vie Cellar and Vineyards).

“Mr. Woo is strongly committed to social upliftment and has had a number of schools built in rural China. When he saw La Motte’s projects concerning its employees, he was eager to get involved and a joint undertaking has come off the ground.”

The company Perfect Wines of South Africa was founded, with a Chinese trade-mark L’Huguenot. During 2012 a total of 2,8 million bottles were exported to China.

“The wine is a blend of Pinotage and Shiraz – a style that goes well with their spicy foods.”

L’Huguenot wines are sold on an incentive basis. Sales people who reach a certain target, qualify for a special wine tourism experience in South Africa.

“Last year we flew in 740 persons. During April, 240 persons were hosted to a harvest experience. They are obliged to experience Cape Town. They also receive a certificate. I this way you ‘train’ proud wine ambassadors for South Africa and China.”

A Franschhoek Tourism Guide was also translated into Mandarin and 65 000 copies were distributed to tourism offices in China.

“If you want to be successful in China, you have to add some celeb-status”, says Koegelenberg. “Mr. F.W. de Klerk owned a small farm near Paarl and we made his wine for him. This was the advent of De Klerk Signature Wines – Presidential Blend. We now produce 10  000 bottles of this wine and Mr. De Klerk join some of our functions in China. This contribution forms part of his income donated to the F.W. de Klerk Foundation.”