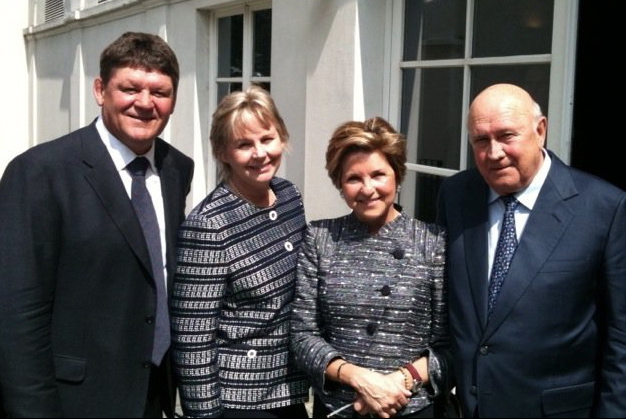 The Presidential Blend, which was a joint venture with Leopard’s Leap Wines, is a blend of Shiraz, Cabernet Sauvignon and Merlot. The grapes were sourced from the Swartlands and Stellenbosch regions in South Africa’s Cape winelands. The wine was matured in 225-litre French oak barrels for 18 months. The result is an elegant and classic medium-bodied red blend.

Only 3,000 bottles of the 2008 vintage have been made, and a contribution from the purchase of the wine will help fund the work of Mr De Klerk’s international foundations dedicated to promoting peace and justice in multi-communal societies.

At the launch at de Warande, an exclusive Flemish business club founded by Flemish businesspeople and the Flemish government, Mr De Klerk gave a speech about the need to accommodate cultural diversity in a globalized world.

In this photo (from left to right) myself, my wife Hanneli Rupert-Koegelenberg, Mrs Elita de Klerk, and Mr FW de Klerk.