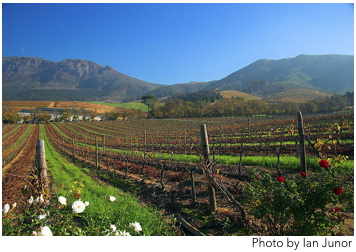 South Africa’s 2010 wine crop will be smaller than the 2009 crop with next year’s yield estimated to be just over 1,300 000 tons, SAWIS said in a statement which also revealed that domestic sales of natural wines had decreased in 2009 whilst exports of packaged wine had increased.

SAWIS (SA Wine Industry Information & Systems) said the 2010 wine grape crop, including juice and concentrate for non-alcoholic purposes, wine for brandy and distilling wine, is expected to amount to 1,006,6 million litres, calculated at an average recovery of 763 litres per ton of grapes.

In all regions, except the Orange River region, the crop is expected to be lighter do to adverse weather conditions and pests. “Another reason for the anticipated decrease in crop size is the fact that total plantings have decreased by 821 ha since 2006,” SAWIS said.

Domestic sales of natural wine for the 12-month period November 2008 to October 2009 show that the market contracted by 5.7% to 295 million litres, compared to the same period the previous year.

The export of packaged wine shows an increase of 9.4 per cent, while exports of bulk wine decreased by 20 per cent, the industry body reported.

“The strong exchange rate, the economic turmoil in South Africa’s main export markets, the non profitability of our wines in a key market such as the UK and the availability of the product will be determining factors in future wine exports and make sales forecasts almost impossible,” SAWIS stated.

Related Articles
Leaked Draft of SA Alcohol Legislation Bans Advertising
The leaked Control of Marketing of Alcoholic Beverages Bill drafted by the Department of Health which totally prohibits the advertising and ...
Read More