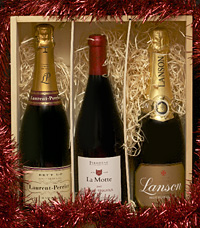 The Culinary Guide recently put together a guide to the ultimate Christmas drinks hamper and included La Motte’s Pierneef Shiraz Viognier 2007. This is what the article had to say about the wine:

“Once wine drinking in Britain was for the well-to-do drinking fine Bordeaux and Burgundy. Alcoholic Australian jam made wine more accessible, with smooth sunshine wines packed with fruit, though too often lacking individuality. South Africa, where the wine industry goes back to the 17th century, offers a middle ground between the fine French and fruity Aussies.

“La Motte in the Franschhoek Valley offers just such a middle way: its wines are fruity and well-structured, but they retain what French rivals would call the goût du terroir, the taste of the land, though not all their grapes now come from their own vineyard established in 1752.

“Take their 2007 Shiraz: creamy in the mouth with a long finish, with loads of blackberry and bilberry fruit, but with a web of subtler flavours – herbs, pepper, coconut. Just the thing to live with turkey and trimmings. And unlike most French rivals La Motte dares tread new avenues – its Shiraz-Viognier Pierneef Collection 2007 is an intriguing blend and epitomises its position astride both Old and New Worlds.”