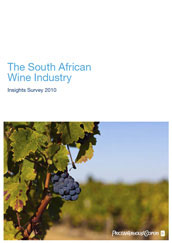 PriceWaterhouseCoopers have recently released a report titled “The South African Wine Industry: Insights Survey 2010”. I will be posting excerpts from the report – written by Frans Weilbach, PWC partner covering the wine industry – in the coming week. Below is the first excerpt dealing with the financial overview of producer cellars – 2009 harvest.

“Many of the findings of the survey were not necessarily unexpected, whilst one or two new issues surfaced after observing the results. On the production side the results clearly confirmed the stabilisation of the red/ white cultivar mix with red now representing ±33% of the national wine grape harvest for a number of years. In line with the South African industry as a whole, the participants also recorded a smaller crop compared to 2008 putting additional pressure on cost per ton in almost all the expense categories.

“Despite the economic downturn, average wine prices increased since 2007 with the supply and demand for red wine becoming more synchronised. This is also observable in the relative decrease in red wine inventory levels.

“The survey again confirmed that the participating producer cellars market the major portion of their produce locally for consumption or to be exported by the local buyers. With the relative strength of the Rand, it is not expected that many will embark on direct export programmes in the near future.

“A very positive finding was that 2009 was the first harvest since 2004 where the average revenue per hectare exceeded the average primary production costs per hectare, for both red and white cultivars.

“From a balance sheet structuring perspective, the average equity ratios of the participating producer cellars remained constant at around 30%. This is certainly not at a desirable level, but challenges to the industry over the past number of years presented little opportunity for aggressive retention of surpluses.”

You can find out more about the survey by going to the PWC website.

Related Articles
Leaked Draft of SA Alcohol Legislation Bans Advertising
The leaked Control of Marketing of Alcoholic Beverages Bill drafted by the Department of Health which totally prohibits the advertising and ...
Read More
Robert Joseph’s Predictions for 2012
The UK market remains a major destination for many South African wines, so it was interesting to read renowned international wine author and...
Read More