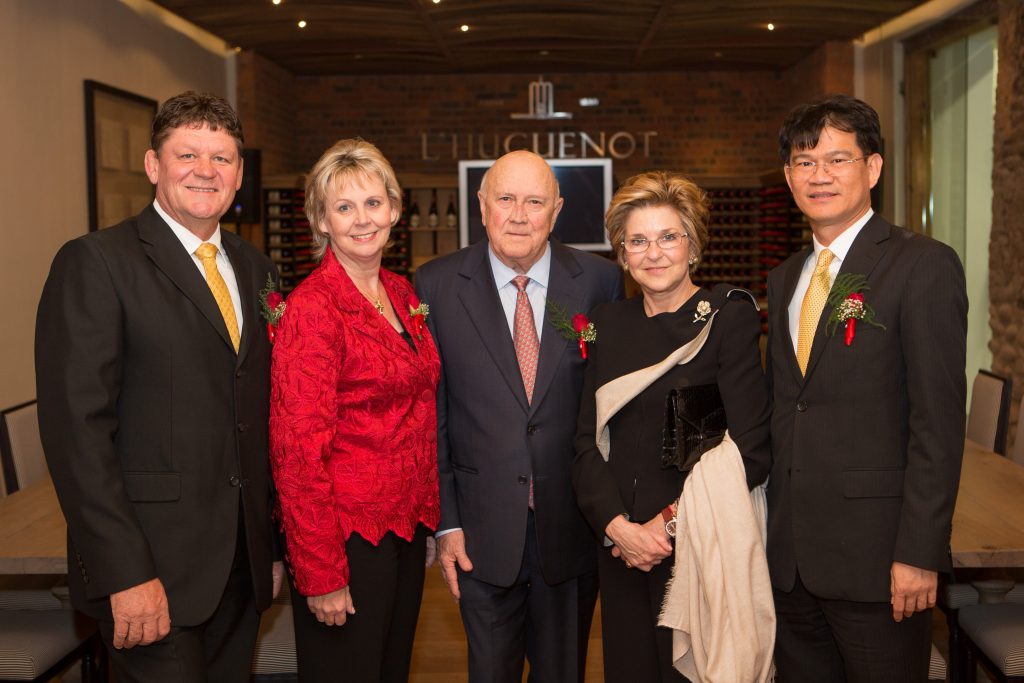 Following on the first Chinese investment in the South African wine industry, the extensively renovated cellar and new home of the L’Huguenot wine brand was unveiled at a Gala Dinner held at its Val de Vie premises on Tuesday, 1 April.

In August of last year, Perfect China, the 51% shareholding partner in Perfect Wines of South Africa announced the purchase of the wine cellar at well-known Val de Vie estate located in the heart of the Winelands, between Paarl and Franschhoek. The purchase included a 25 ha wine farm with 21 ha of vineyards and the historic manor house dating back to 1783.

Perfect Wines of South Africa, a JV that was formed in 2011 between businessman Hein Koegelenberg and Perfect China in Yangzhou, has now renovated these cellar facilities to extend to:

“We are delighted to have this beautiful new home and modern facilities for L’Huguenot wines, says Chairman of Perfect Wines of South Africa, Hein Koegelenberg (also CEO of La Motte and Leopard’s Leap Wine Estates). “Nurturing our relationship with China is very important to us, but we also focus on how volume sales in China can benefit the local economy through increased production and job creation.”

All the renovations have been done while keeping in mind the rich French Huguenot history and heritage of wine-making in South Africa. The vinoteque and cellar feature a contemporary take on traditional French architecture and décor with the French Huguenot family crests displayed in the barrel maturation cellar. The historic manor house will soon be restored to its traditional splendour in order to host a Huguenot museum.

In 2011 and 2012 already, the L’Huguenot wine brand was responsible for the export of 2.8 million bottles of wine to China – amounting to about 25% of the total annual figure for South African wine exports to China. The capacity of the new cellar and the potential of the maturation facility that equates to 1 million bottles, allow for the production of the premium red wines. Other cellar facilities in the Winelands will still be used for the production of the remaining volumes. The L’Huguenot cellar and vinoteque will be the address of L’Huguenot wines where Joint Venture associates and Chinese partners will be hosted, but the facilities are not open to the public.

Speaking at the gala event on Tuesday night was former state president, F.W. de Klerk and Minister of Finance, Economic Development and Tourism in the Western Cape, Mr. Alan Winde. Mr. De Klerk addressed South Africa’s current position within the world economy and the opportunities for South African trade with China, especially within Brics, while MEC Winde focused on the Western Cape, with specific reference to tourism and the important role China has to play in the local industry.

The event was also attended by the CEO of Perfect China, Mr. Woo Swee Lian and a delegation of 240 Chinese representatives, who will also participate in a day of harvesting and wine-making on Wednesday, 2 April. As with the 740-strong delegation invited to the Cape in September 2013, the aim of bringing the Chinese representatives to South Africa is to introduce them to the culture of the Winelands and to make them ambassadors for South African wine in order to stimulate wine sales in China as well as tourism in the Western Cape.

On the picture from left to right: myself and my wife, Hanneli, former state president of South Africa, Mr FW de Klerk and his wife Elita, CEO of Perfect China, Mr Woo Swe Lian.

For more information on Perfect China or Perfect Wines of South Africa, please contact the office of Hein Koegelenberg at +27(0)21 876 8805 or cellar@la-motte.co.za