Global Wine Consumption Trends, They’re Not What One Would Think 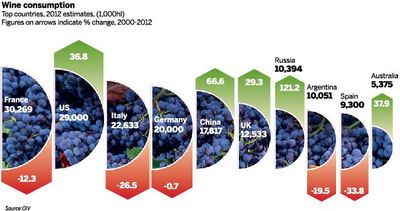 It’s been interesting to watch the wine scene grow in the USA since this was previously a more modest business sector in this country, a country that has historically favoured loud advertising for its beer and sodas. The recent decade has seen Americans develop a passionate taste for the grape – being knowledgeable about wine has become fashionable and consumers actively seek out and explore decadent wine menus in bars. The interest has seen a spurring of growth that has propelled the US to become the 3rd largest producer of wine in the world.

To understand the theory behind the growth in the US, and countries like China and Russia, it makes sense to look to the decline of wine consumption in European countries where wine has long been a traditional staple of their culture. In The New Bunch, an article by wine writers, Jancis Robinson and Valentina Romei, the decline – or ‘waning appeal’ as they aptly put it – of wine consumption in Southern Europe is eloquently explained.

“Spain has more land under vine than any other country but its per capita annual wine consumption fell 46 per cent between 1995 and 2011 to only a little more than Britain’s. Consumption is also sinking in other countries traditionally associated with wine, including France and Italy.”

What has for centuries been the guest of honour at the dinner table is now being swapped out for beverages that require less art and performance to consume. The generational hand-down of this deeply embedded culture is not resulting in the passing of esteemed appreciation on to younger generations, but rather that it’s ‘old hat’ and derives from the peasant culture of old Europe.

This traditional wine culture is a far cry from the modern libations on the market and doesn’t speak to the pace of life or the consumer culture the younger generation implores. Essentially, as European cities modernize, so too do the diets, tastes and aspirations of their populace – if wine is no longer a drink to be coveted at social occasions, it would appear that what we’re witnessing here is a generation who have literally become jaded by the fruits of their home country.

“In France there are signs that disaffection with wine has hit rock-bottom, in general for younger southern European drinkers, wine seems much less exciting than heavily advertised beers, spirits and sodas. For many in Europe’s Latin cultures, taking a wine course would be as bizarre as studying potatoes.”

The New Bunch notes, that in China, much of Asia and to a certain extent Russia, wine drinking, even if accompanied by less connoisseurship, is also seen as novel, modish and a signifier of sophistication and westernisation. This is symbolic of the fact that China, already the world’s largest supplier of tea, has quickly embraced the vine as a new export industry and holds the fort as the 5th biggest producer, and consumer, of wine.

This century Chinese consumption of wine has in fact overtaken the amount consumed by the British while consumption has plummeted in France, Italy, Spain, Portugal and Argentina.

BK Wine Magazine supports this fact, and shows the traditional big European wine consuming, and producing, countries’ shrinking consumption, with the actual numbers for the period 2000 – 2012 as follows:

The biggest growth markets have been