Gems in the Cellar 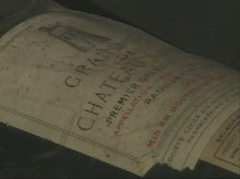 The problem, and beauty, of large wine cellars built up over time is that you can lose track of some exceptional wine only to experience the joy of discovering the wine years later. This is what happened at Bern’s Steakhouse in the US, which has the largest restaurant wine collection in the world with nearly 500,000 bottles, when senior sommelier Eric Renaud found a 1947 bottle of Chateau Latour.

“I saw this bottle on its side, tucked the wrong way with a few bottles in front of it.” Renaud told the Chicago Sun-Times. “I don’t think there’s anyone in this business who wouldn’t get excited about a wine like this.”

The rare Bordeaux will be included on Bern’s new wine list when it’s released next month at a price of $30,000. The wine will be sold to the first person who orders it. The wine will have to be consumed on the premises as the restaurant doesn’t have an off-trade licence. “If the wine is bad, there’s no charge,” Renaud said.