How First Growths Have Fared In 2012 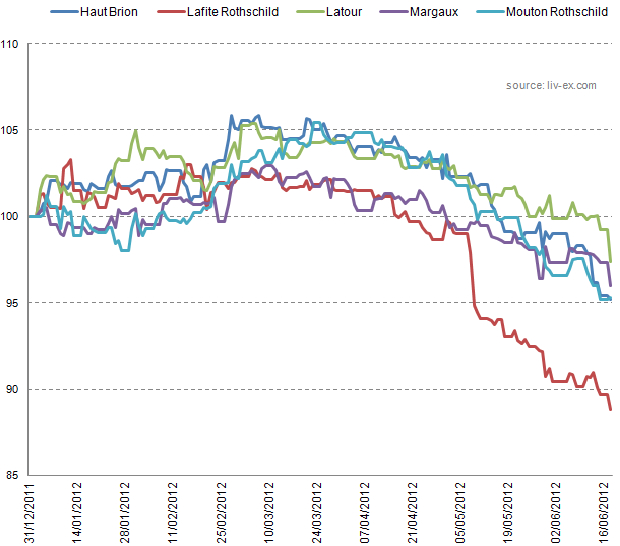 Liv-ex, the London-based fine wine exchange, recently reported on how First Growths have fared in 2012 and it has been a downward trajectory. Below is how Liv-ex described the trend:

“As unpredictable June weather heralds the midpoint of the year, we already know from the falling of the Liv-ex 100 that the first half of 2012 has not been a successful one for the fine wine market. The last ten vintages of the First Growths have experienced a similar downward trajectory, as shown in the chart (above).

“Lafite is proving to be the worst performer of the Firsts, falling by almost 12% since the start of the year. Its successful 2011 release has not been enough to draw the market back to a once-favoured brand.

“By mid-May Latour was the only First that had risen year to date, helped by sales of the 2009 and 2010: the latter comprised 53% of all 2010 Bordeaux sales in May. While it originally seemed that the market was keen to buy vintages from a label that will no longer release its wines En Primeur, in the last month its fall mirrors that of its fellow Premier Crus.”

The drinks business commented on the slump in sales saying “The decline in the first growths is part of a wider slump in the market at the moment, part of which will be the beginnings of the quieter summer period” and added that the slump in the Bordeaux market could also be evidence of a broadening market.