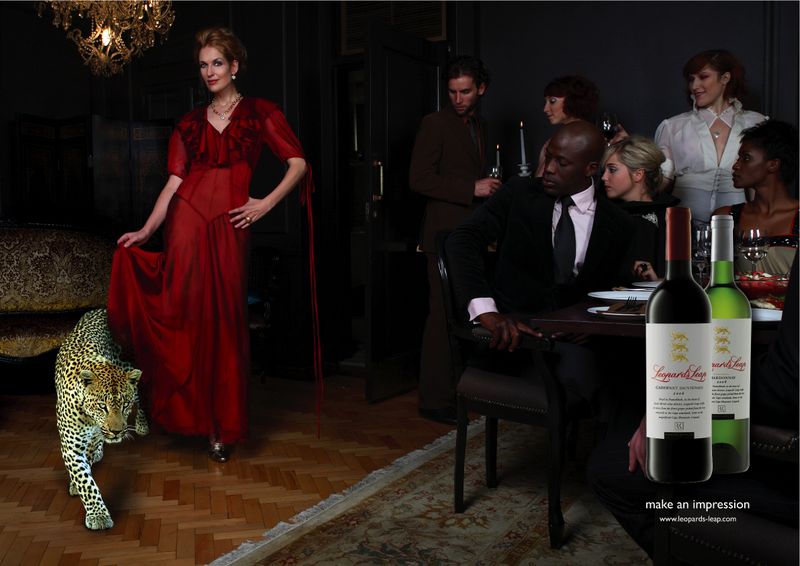 Just over a year ago we produced a print ad campaign for Leopard’s Leap Wines titled “Make an Impression” (you can see one of the executions above). Essentially we had been listening to our research that consumers found dinner parties the most daunting occasions to buy wine for as their choice said a lot about their knowledge of wine.

The bottom line was that people wanted a wine they new would be good value for money and wasn’t going to let them down. We had previously used product shots stating that Leopard’s Leap was the perfect dinner companion. But we wanted to go further with this campaign.

The ad we created was of a woman arriving at a part with a leopard. All the guests took notice: The woman had made an impression. In putting together the ad we moved away from typical wines ads of having the wine or a vineyard featured in the actual photograph or the product shot in the middle of the ad. The bottles were there, but they were off to the side.

In doing so, we spoke more about the lifestyle of our consumers.

I as therefore interested to see, a year later, the print ad for Constellation brand Blackstone Merlot that got a featured write-up inThe New York Times.

The idea behind the campaign – created by San Francisco Amazon Advertising which also creates campaigns for other Constellation wines like Mondavi – was that “consumers can trust Blackstone to provide fine wine at reasonable prices” (most of its offerings cost $8 to $10 a bottle).

In the ad below the things that the male character can trust are shown with an asterisk and  the payoff line “*Here’s to the things in life you can count on. Blackstone Winery.”

The campaign, which was developed last fall in the U.S., addresses the exact same human truth that we did: consumers want value from brands they can trust. Even the execution had similar elements.

“We don’t even show anyone drinking the wine,” Tonya Merke, associate creative director at Amazon Advertising told The New York Times. Omitting the stock shots of wine drinking introduces an element of unexpectedness to the ads, Merke said, and helps them stand out amid a sea of look-alike wine campaigns.

There were differences in the campaign: their USD 1 million campaign cost 30 times our campaign (we are still running ours) and we didn’t have the money-back guarantee. And they used a small dog, we used a big cat.