Delegation of Almost 750 Chinese Guests Welcomed to The Cape Winelands

Perfect Wines of South Africa, a joint venture that was formed in 2011 between Hein Koegelenberg of Leopard’s Leap and Perfect China in Yangzhou, is currently hosting 700 members of the Perfect China sales and distribution team as well as 42 VIP’s visiting Cape Town on an incentive trip.

This incentive trip aims to introduce the top performing sales people of Perfect China to the South African winelands which will enable them to do an even better job of selling South African wine. The venture also focuses on tourism from China to South Africa. This is only the first of a planned annual incentive visit of the same nature aiming to contribute to the local economy by turning the visitors into ambassadors of South African tourism.

On Tuesday, 3 September the group was welcomed to South Africa by Hein Koegelenberg, Chairman of Perfect Wines of South Africa. Explaining the initiative he said: “Through investment and cooperation, South Africa will benefit from the increase in demand for our produce and also through the creation of job opportunities – in both the (wine) production and tourism fields”. The Chairman of Perfect China, Mr. Tan Sri Koo also addressed the crowd in Mandarin explaining the importance of a close relationship between the supplier and distributor and the importance for the Chinese representatives to be introduced to South African culture.

Hosted for a morning programme in the Cape Town International Convention Centre, the group of top Sales Representatives of Perfect China’s one million strong Sales Team, together with the Top Distributors and VIP guests were addressed by Western Cape Premier, Helen Zille: “The wine industry is a vital part of the Western Cape agriculture sector and China is one of our most important expanding export markets and especially, one of the fastest growing wine markets.”

Former President FW de Klerk who is currently in Europe also addressed the delegation via video on the importance of trade relationships between China and South Africa: “Good hope” is an appropriate theme because of the many exciting prospects that South Africa presents – despite the many challenges that confront the country.”

The day’s programme was concluded with a gala dinner attended by Deputy Minister of Tourism, Ms. Tokozile Xasa who addressed the audience on the importance of tourism and the cooperation between BRICS countries, especially South Africa and China. “China holds great significance towards tourism in South Africa and has made remarkable achievements. From January to December, 2012, the total tourism arrivals from China (Hong Kong included) to South Africa has reached 132,334, an increase of 55.9% over 2011. China has become the 4th largest overseas source market to South Africa with the arrivals more than tripled since 2009.”

The festivities of the evening included amongst others a children’s choir from Dennegeur in the Franschhoek Valley and Gumboot dancers.

During the rest of the week, the Chinese guests will be introduced to the new home of L’ Huguenot wines at the Val de Vie cellar between Paarl and Franschhoek, they are visiting Aquila Nature Reserve to see the Big Five and they will visit Table Mountain and experience other tourism highlights in and around Cape Town.

For more information on Perfect China or Perfect Wines of South Africa, please contact the office of Hein Koegelenberg at +27(0)21 876 8805 or cellar@la-motte.co.za 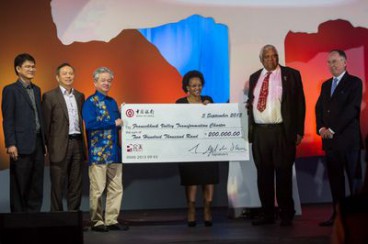 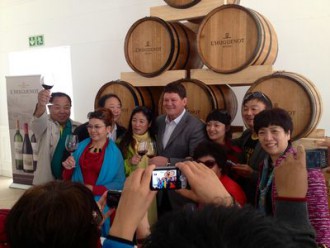 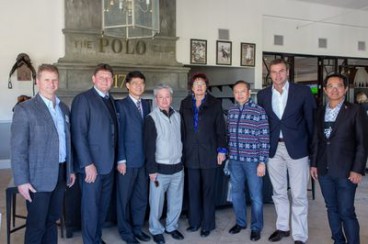