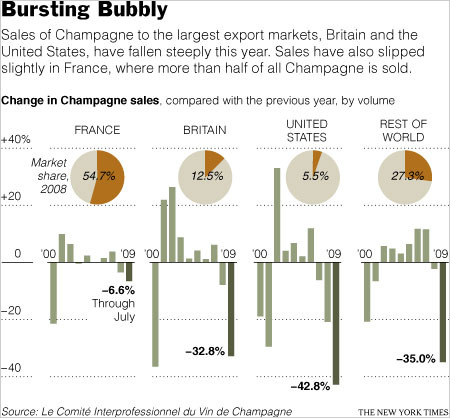 Traditionally the festive season, starting in November and running through to New Year’s Eve, is a key time for Champagne producers when they sell millions of bottles and make most of their profits.

This year, with the effects of the global recession still being felt, vintners are expecting a tougher trading climate with retailers already discounting and consumers down trading to cheaper sparkling wines.

“Bottles of Moët & Chandon and Veuve Clicquot are one-third off with the purchase of two — £24.99 ($41.69) at one top British retailer. In Australia, a price war has broken out among the major liquor retailers. Even in France — the biggest market for Champagne — the supermarket giant Carrefour is laying holiday plans to sell Champagne for less than 10 euros ($14.90). A year ago, those bottles might have sold for 12 euros,” the newspaper reported.

Discounting a luxury brand, which Champagne is, is a drastic move but one that has been spurred on by large drop in sales to the US (off 43% in the first nine months of this year) and Britain (down 33%). The top end Champagnes are also seeing customers trading down to cheaper sparkling wines.

Reports by Nielsen show that sparkling wines produced by Spain and Italy are up by 10% and some of the French Champagne houses fear the trend will accelerate this festive season.

“The $64 million question in this environment is how will consumers respond heading into this critical time, when we know they are under extreme wallet pressure,” Danny Brager, Nielsen’s group client director, told The New York Times.

Some brands like Taittinger have responded by upping their in-store marketing spend whilst Moët & Chandon is offering more value by packaging its Champagne with flutes  and other items.

“We still believe Champagne is needed in tough times,” said Marc Jacheet, the global director for Moët & Chandon told the newspaper. “It’s not a price battle that we want to get into. We do discount, but selectively and reasonably. We believe more in providing rituals.”