The Business of Black Friday 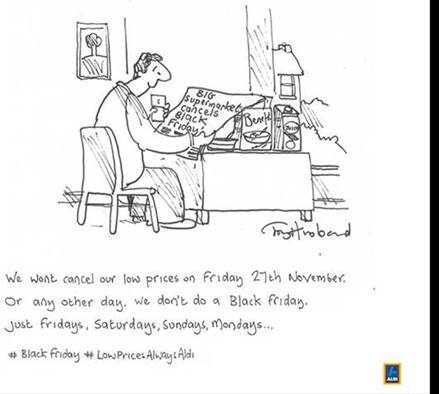 It is hard to ignore Black Friday. Around every corner and on every possible media device, you are confronted with special offers that are almost too good to be true. But what is Black Friday and why this crazy promotional spree?

Black Friday is the day after Thanksgiving in the United States. It is seen as the first day of the Christmas shopping season and consumers are lured to the shops by a host of special offers and promotional prizes. But where did it all start?

Interestingly enough there is quite a bit of confusion on the exact history and origin of Black Friday.

The Guardian says: “President Roosevelt gave it a special day, police in Philadelphia nicknamed the resultant chaos – and Amazon and Asda exported it to the UK”.

According to Wikipedia the term originated in Philadelphia: “used to describe the heavy and disruptive pedestrian and vehicle traffic that would occur on the day after Thanksgiving.” The Guardian seems to agree and gives more detail: “However, most agree that retailers ultimately have the Philadelphia police department to thank for Black Friday. The force nicknamed the day after the chaos that engulfed Philadelphia when shoppers flocked to the high street sales just as spectators travelled to the annual Army vs Navy American football match.”

Other explanations is that retailers often operated “in the red” between January and November and “Black Friday” indicated the profit season where they would get back “in(to) the black”.

What is however very clear is that Black Friday is a very important date on the commercial calendar. Just as the real meaning of Christmas easily gets lost among the commercialization of the festive season, Thanksgiving is very much about shopping. Already in the time of President Roosevelt, retailers were lobbying for the date to be moved earlier from the traditional last Thursday in November, in order for Thanksgiving and Christmas shopping not to overlap as much. Since 1941, Thanksgiving is always celebrated on the fourth Thursday in November, rather than the last.

It was only last year that I saw Black Friday activity in South Africa and it is really only this year that it seems to be taking the country by storm. Shopping hours have been extended, eager shoppers were lining up outside stores early this morning already and most retailers turned into “battlegrounds” the moment they opened their doors.

Interestingly enough I have not seen many Black Friday wine specials. Soft drinks, house hold items and electronics are all over the place and I have seen one or two beer and whisky brands, but not much wine.

And while what we all really want at this time of year, is to end our current projects and then enjoy some peace and quiet over the holidays, there is no denying and for the most part escaping, the silly season which, it seems, officially started today!