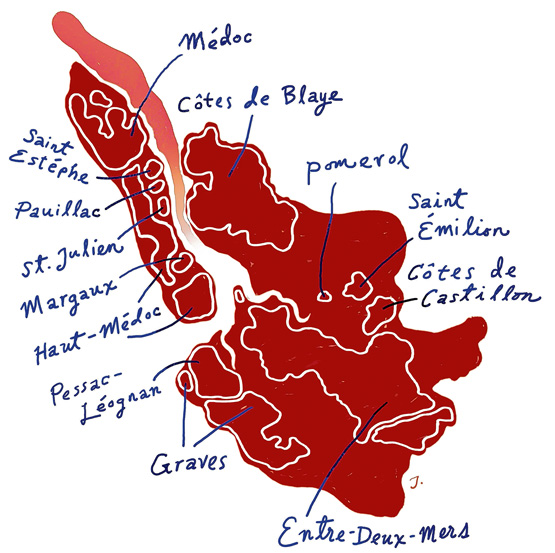 “There are only a handful of wine regions that manage to transcend mere geography to achieve true iconography,” is how The Wall Street Journal wine writer Lettie Teague starts her guide to Bordeaux.

“This roughly 300,000-acre region in southwest France has been a reference point for the world’s winemakers for hundreds of years and a sought-after address for aristocrats, billionaires and the occasional oligarch, too.

“But Bordeaux is much more than a single region or type of wine; it’s an increasingly fractured place where the big names (Lafite, Latour and Mouton) turn out wines that sell for thousands of dollars while the lesser crus and the unknowns (just about everyone else) are forced to scrabble after a euro or two.”

The entire article which tackles issues such as the Bordeaux blend, the geography of the region and its hierarchy of wines can be read here. The map at the top of this post was done by John S. Dykes for The Wall Street Journal.